Some violent crimes are serious offenses and are classified as felonies. Others could be misdemeanors, like a bar fight or public intoxication, but may still result in jailtime.

If you or a loved one is arrested and charged with a violent crime, it’s imperative that you work with an experienced bail bondsman when you need to get someone out of jail fast.

What are violent crimes that may require posting bond to get out of jail?

Violent crimes come in many forms, all of which involve force or the threat of force, such as:

Generally considered a public nuisance or “disturbing the peace.” Typically involves inappropriate public behavior such as being too loud, fighting, or being drunk in public. These are relatively minor crimes and are usually classified as misdemeanors.

Occurs when any one person interferes with a “lawful” arrest, whether it involves you or someone else. This can also happen if someone is acting recklessly during an arrest and unintentionally harms an officer.

The attempt to cause physical harm to another person. This charge could be a misdemeanor or a felony, depending on the condition of the victim and seriousness of the offense.

The same charge as an assault but with a deadly weapon involved. This is an automatic felony of the third or fourth degree.

Theft through force or violence. Could also be under the threat of force of violence and if there is a weapon in the possession of the perpetrator.

More serious charge involving the display and use of a deadly weapon, causing severe physical harm during the altercation.

Much like robbery, but includes the invasion of a person’s residence while using threat or committing violence to carry out a crime.

Like burglary, but includes the use of a deadly weapon to carry out a home invasion crime.

Committing sexual acts against someone’s will. Could be done by the threat of violence or the victim could be significantly impaired with drugs, alcohol, or controlled substances. Also, any person taking advantage of another person’s physical or mental condition, or advanced age.

To take someone away illegally by force and detain them against their will. This is often done for a ransom.

To kidnap someone by deception, persuasion or fraud. To mislead someone into getting into a car. A good example is a stranger offering candy to a child.

How much is a bail bond for a violent crime?

A bail bond can vary in amount depending on the charge and nature of the crime. In general, the more serious the crime, the higher the bail amount will be. A person accused of a very serious felony may even be held without bond, especially if this person is considered dangerous.

What if I can’t pay my bail?

Not being able to post bail means you must remain in jail until your court date, which could be several months. If you can’t afford to pay bail for yourself or a loved one, a bail agent can help. Like a personal loan, a bail bondsman pays money on your behalf so you can get out of jail. In return, you must promise to attend all future court proceedings and pay a small fee.

Should I post bail or take a plea bargain?

Defendants who cannot post bail may be tempted to take a deal just to get out of jail, but is this really a good idea? After all, you’re innocent until proven guilty and if you take a deal you’re left with a criminal conviction that follows you the rest of your life. Prosecutors may tell you a plea bargain is in your best interest when, in reality, they’re just trying to lighten a heavy caseload or save the court money.

Why you should get out of jail after an arrest

It’s easier to fight your case on the outside. The sooner you get a lawyer, the better. Not only to prepare your case for trial, but also to request a reduced bail amount. By posting bail, whether with your own money, funds from friends and family, or by hiring a bail bonds company, you can focus on the upcoming court proceedings in the comfort of your own home.

Violent crimes range from a simple assault to aggravated burglary and rape. If you or a loved one has been accused of a violent crime and needs to post bond and get out jail, contact Castle Bail Bonds today. 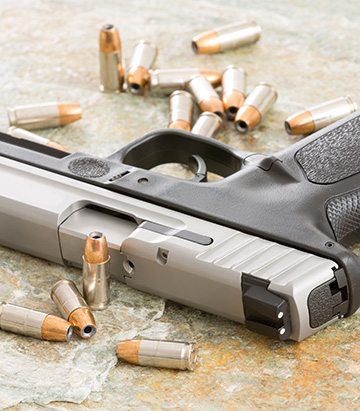