Many individuals in Ohio do not even realize that they may be breaking the law if they own a gun, firearm, or any other deadly weapon. Even though Ohio protects the right to bear arms, legal gun carriers must meet certain criteria outlined in the open and concealed gun carry laws.

For example, to legally carry a gun you must be 21, have a proper license, be a U.S. resident, and have zero felony convictions, among other factors. Even if you meet all the criteria there are places where carrying a gun is illegal and it is up to you to know these restricted public buildings and areas.

What are the types of weapon bail bonds?

Owning a gun illegally in the state of Ohio will result in jail time. Here are a few examples of weapons charges that may require bail.

What is a dangerous ordnance?

Examples of a dangerous ordnance include a sawed-off shotgun, zip-gun, explosive device, rocket launcher, grenade, mine and torpedo, to name a few.

2. Weapons While Under Disability:

If you acquire, carry or use a firearm or dangerous ordnance and are a convicted felon of a violent offense or under indictment for a violent offense (out on bond and by using a weapon violate conditions of the bond) you could be charged with this crime. This also applies to a fugitive from justice, person convicted of any illegal drug offense, someone mentally incompetent, or drug or alcohol dependent. Most charges are a felony of the third degree.

3. Improper Discharge of a Firearm:

If an individual discharges a firearm into or at an individual’s home or habitation, in a school safety zone, within 1,000 feet of a school building or premises, in a cemetery, on a public road or highway, or in a park near an occupied building, they may be charged with the improper discharge of a firearm.

How much is bail for unlawful possession of a firearm?

Bail amount for illegally owning a gun varies based on your prior record, how the gun was obtained, if you are considered a flight risk (the court is not confident you will show up to future legal proceedings if they let you leave jail), or if you are a drug addict, among other reasons.

No. If you are a convicted felon and you’re caught carrying a gun, you will go to jail. If you have a felony and live in a house where a gun is kept, even if you are not aware of the gun, you could face criminal charges if the gun is discovered. If your felony conviction was a long time ago and you have since turned your life around, you still can never own a gun.

If you or someone you know is in jail for a weapons charge and you need bail money, call Castle Bail Bonds today. We want to help you post bail and return home so you can prepare for your court date in comfort, not in a cell. 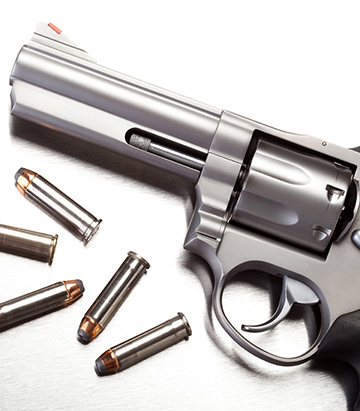